Uber Business Model is also known as a Multisided Platform Business Model as it connects drivers (offer) and passengers (demand) in order to offer cheaper transportation and an additional source of income.

According to Dara Khosrowshahi, CEO of Uber, “Uber accounts for less than 1% of all miles driven globally. Just a small percentage of people in countries where Uber is available have ever used our services”.

Still, I am sure that you know very well what this company is, probably you have already used its services and, most likely, you have the app installed on your smartphone.

Uber is a technological platform that has revolutionized urban transportation – and has given taxi drivers and cab companies a lot of headaches. In short, it is an app that connects drivers to users who need a ride, using a smartphone as a tool.

Currently, with kind of a decade of existence, Uber operates in more than 900 cities worldwide and has a valuation of more than $ 70 billion. Let’s understand the business model of this innovative urban transportation giant, which allows us to get a vehicle within reach of a click.

How does Uber operate?

To get an Uber, you need a smartphone with GPS system, internet and the Uber app installed. Then, in the app, you will enter your destination and the platform will locate an available driver, based on the location of both. As soon as you get in the car, the driver will take you to your chosen destination, using the navigation system of the app itself.

There are different categories of vehicles in the app, depending on the city in which you are going to use it. There are some differences in the rates for each category, accordingly.

The value of the race is calculated by an Uber algorithm, considering distance traveled, elapsed time and fuel used. There are also different payment methods, depending on the location where you use the app.

Besides, there is a rating system, which is an important feature of Uber. The rider evaluates the driver and the driver also evaluates the passenger. Thus, everyone can check each other’s degree of confidence before accepting a ride.

Uber’s biggest advantage for users is convenience. To begin with, the app is user-friendly and is rarely down.

Today, practically everyone in urban areas has a cell phone, mostly with internet, so the majority of the population can ask for a car without having to walk even a step from wherever they are.

And, when making the request, users receive several information about the driver and the car, such as license plate, name, photo, time of service and grade within the ranking system.

This offers more security to the user. In fact, they can also send their ride information in real time to someone else, which also guarantees them more security and peace of mind.

For drivers, the big benefit is being able to get a job, just having access to a car and a cell phone, being able to choose their working hours, and having their income coming in regularly.

In addition, due to the ranking system, the driver also has greater security by being able to check the user’s profile and their score on the app, to decide whether to stay with the ride or not.

Regarding to Uber itself, its great advantage is that it was the first entrant in this market. Although it can be said that taxis are competitors of Uber, the customer segment is different, since we are talking about an audience that will ask for a ride via the app and not wave at an identified car that is in their way.

In addition, Uber has established itself in the market not only because it is the first in its business model, but because it has set up a functional structure, which really works and which has guaranteed the confidence of both drivers and riders.

As negative points, we can mention the liability questions and insurance issues, which the company continues to face both in the cities in which Uber enters and in those in which it has already been operating. This includes battles against taxi drivers’ unions as well as against some municipalities around the world.

As for costumers, both users and drivers, the disadvantage is precisely the lack of strong competition. Although in some locations there is already competition, competitors are unable to force a fight over price, for example, making Uber practically choose how much to charge the user and, mainly, how much to pass on to the driver.

let’s see how the Uber Business Model Canvas can be designed: 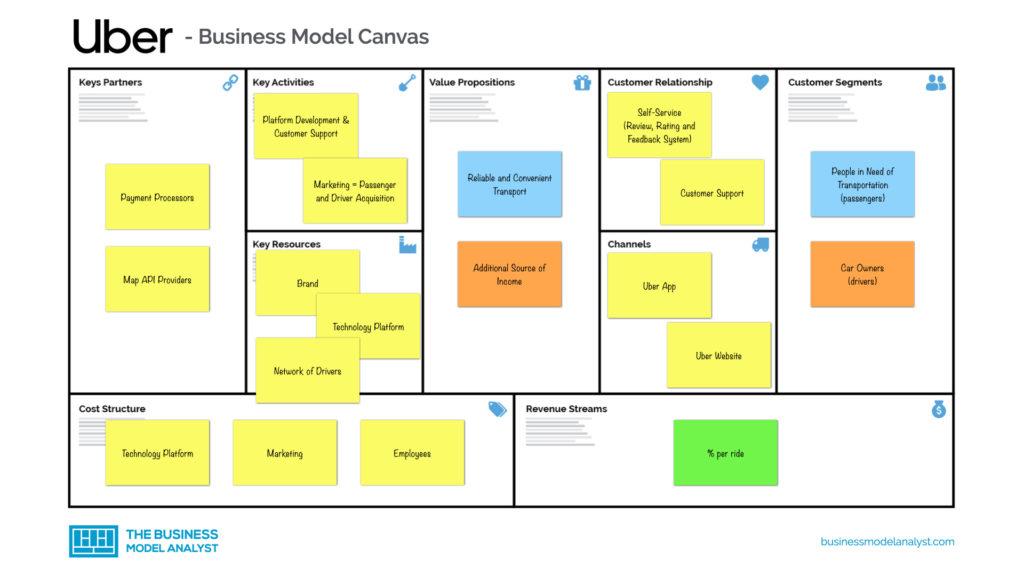 For customers, the greatest value proposition is the convenience of not having to look for a taxi – the car comes to you. Cars are available 24/7 and their route can be tracked. In addition, fares are generally lower than those charged by taxi drivers and the rider can estimate how much the ride will cost before calling the driver.

For drivers, it is a source of income (main or additional), a job that doesn’t require experience, with flexible working schedules and easy access to passengers.

And let’s not forget that the passenger informs the destination on the app, which avoids misunderstandings when we are talking about people who do not speak the same language, which is a positive point for both sides.

In general, Uber has two customer segments: riders and drivers.

The side of riders are people who either do not have their own car, need to travel outside their city of residence or don’t want to drive at a certain time, for example, when they know they will consume alcohol at a party, concert or celebration.

And the side of drivers are those people mentioned above, who are probably out of market or need some extra money, and may start a new job just by driving and using an app.

Uber’s focus is predominantly on the customer. If the company has no credibility with the end user, then it has no reason to create a relationship with the other two. Transparency regarding time and prices, as well as confidence in security and privacy are essential here.

Uber’s second largest customer is its own driver. Since the driver is not an Uber employee and their vehicle is not Uber’s property – even though there are several lawsuits around the world in this regard – the company needs to offer them attractive working and payment conditions to keep its business running.

As for regulators, Uber seeks compliance and responsibility within the law, within a threshold that also allows it to obey the laws of the market itself.

Uber’s most important key partner is its driver, without whom the company doesn’t reach the final costumer, doesn’t deliver its value proposition and therefore doesn’t produce revenue. They are the supply side of the chain.

Other important key partners are investors, which allow the company to develop and reach other levels of performance. They bring the initial rounds of funding to develop the app, algorithms and new proposals, such as driver-less cars. Of course, this revenue is also used for other expenditures.

And, last but not least, technology providers, with GPS, payment, communication, cloud storage and data analytics systems, among others.

Uber’s two key activities are (1) developing and maintaining the app (and its algorithms) and (2) maintaining and improving engagement between riders and drivers.

In order for these activities to work, its key activities also include marketing, communication between the parties, customer service, and more.

Uber has two key resources: (1) the platform that connects drivers and riders, with a focus on continuous improvement of its resources and algorithms, and (2) the Uber brand itself, which is used in all cities where the company operates.

The cost structure of Uber is all about maintaining the platform and marketing to acquire new customers (Customer Acquisition Costs – CAC). In addition, there are legal costs, credit card fees, insurance, research and development investments, customer support, and more.

Historically, in those ten years, the biggest channel for accessing customers was word of mouth. In addition, the other widely used distribution channel has been social media. And, of course, the app stores, where riders and drivers download their Uber apps.

This is the block that answers the question: How does Uber make money? Let’s take a good look at that.

How does Uber make money?

Uber’s business model is based on commissioning and this is, therefore, its core revenue stream. The total value of each ride includes the driver’s payment, fees, taxes and company commission.

In general, the driver gets about 75% to 80% of the value and the rest keeps with Uber. But the commission can reach around 50% when it comes to a short run, due to the fees and minimum fare.

But this is not the company’s only source of income. Uber also makes money with promotional partnerships. These are marketing campaigns run through the app and several times through the ride itself (for example, the BMW 7 Series offered free trips in their new car to promote it).

In addition, it is worth remembering that Uber has been expanding its service offering. Probably the most famous one, especially during this time of social isolation due to Covid-19, is the Uber Eats.

It is a food service delivery, with the same characteristic of the transportation app – connecting restaurants to costumers through an online platform, providing the delivery service through partner deliverers.

The revenue streams in this case are three: advertising, the delivery fee and the shares in revenue with the restaurants. All of these values ​​and percentages vary depending on the location where the operation takes place. 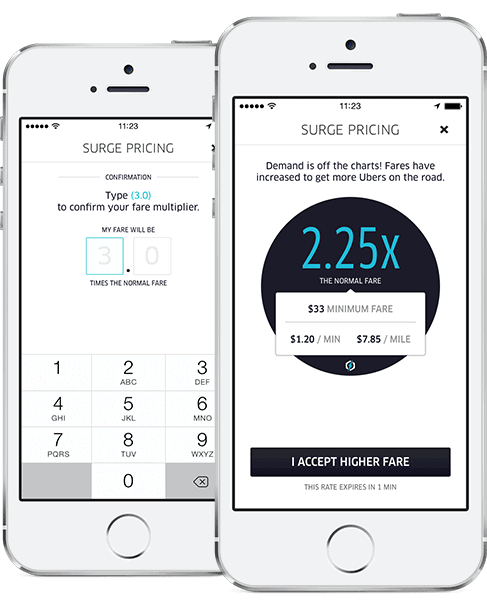 The Success of Uber Business Model

The success of Uber’s business model is very clear from the fact that you will rarely see a user comparing prices on their mobile before ordering a ride. They will simply open the Uber app and enter their destination.

In addition, the company has had a very positive response from the population, especially in locations with employment problems, as it offers a new possibility to several people who are not working.

Any entrepreneur can draw several “lessons” from Uber’s business model. For example, you don’t need a large equity to start a business. Uber doesn’t even own a car and, still, provides over 1 million rides a day.

More than that, its founders saw a problem in an industry and simply sought a solution for it. And in doing so, they were able to transform the cab industry.

Finally, two of the biggest entrepreneurship classes you can take: treat your workforce as partners and expand one step at a time. Uber started with cars and is already operating with bikes, boats and even helicopters!