What is the Multisided Platform Business Model?

The multisided platform business model is, basically, a service or product that connects two or more participant groups, playing a kind of intermediation role. Its value proposition is to enable this connection, making it easier for them to find and relate to each other.

Most of these companies connect two groups. For example, for businesses like eBay, Uber, Airbnb and PayPal, there are only two sides: buyers and sellers, drivers and passengers, owners and renters, merchants and consumers. They are also usually called “two-sided platforms” because they are composed of just a supply-side and a demand side. Let’s take a look at the Multisided Business Model Canvas pattern: 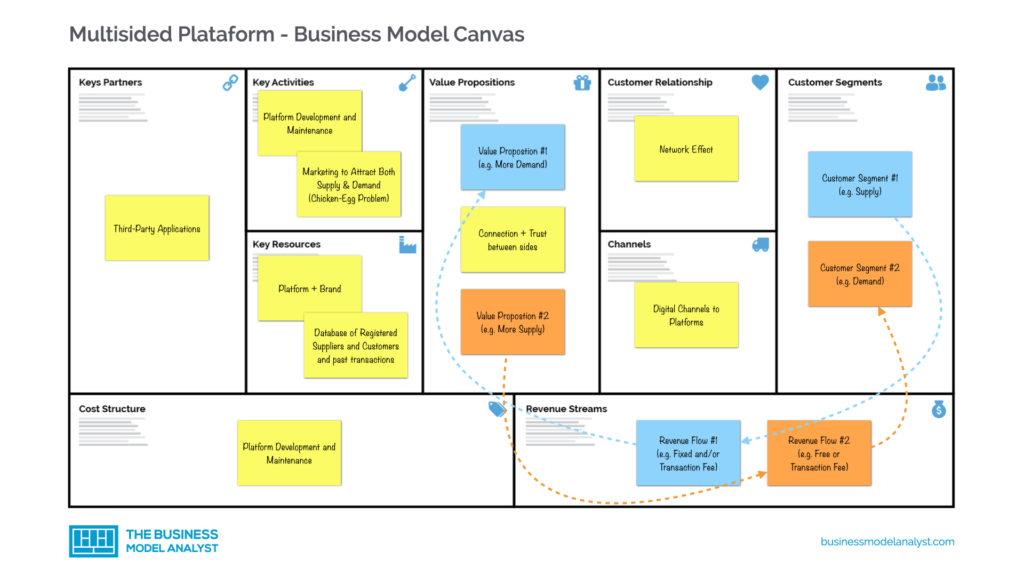 But there are some other companies that provide interactions among more groups, such as Facebook. Facebook connects users, advertisers, content developers etc. And, in this case, the biggest group – the users – are simply consumers. They use the platform, but they don’t pay for that. On the other side, there are customers. This group is smaller, but it’s responsible for the revenue. On Facebook, again, the advertisers, for example, pay to reach their own customers, who are among Facebook’s users.

In simple words, multisided platforms’ value proposition is to be the matchmaker. They don’t produce the content or the products, and they don’t actually offer the service themselves. To play this role as intermediate, the platforms need to be relevant. If Uber had just created the app but few people found it interesting or useful, then there wouldn’t be passengers searching for drivers. And so, there wouldn’t be a demand for the drives themselves. If YouTube couldn’t be able to monetize its business, there wouldn’t be content producers and advertisers using it as a business. It would be only kind of a video depository for people to have a good time. Multisided platforms create value for their participants by:

As we mentioned the value of networking, it is important to highlight that, in the multisided platforms’ world, the network effect can be positive or negative, thus, enhancing or reducing the business’ value. In order to be useful for all the participant groups and, therefore, a profitable business, the multisided platforms must attract users. The more users, the more valuable. There can be direct network effects, also called, same-side network effects. As the name states, it is when participants on one side of the network affect each other. A good example is social media companies, like Facebook or Instagram: the more users, the more interesting it becomes. An there can be indirect network effects or cross-sided network effects. In this case, the participants of one side affect the ones of the other side. It’s the most common since there cannot be a good number of suppliers if there is no demand. But, also, the audience loses interest if there aren’t enough available options. For example, drivers and passengers, or buyers and product variety.

One of the most common revenue streams of MSPs is the transaction fees. It can be fixed or a percentage of the value. Often, this process is invisible to the customer, like in most of e-commerce stores. Sometimes, the platforms charge for access, such as dating sites, for example. And other times, they charge for enhanced access. It’s the case of ads on Google, for example. The business can surely appear for free when users do their search. But, when they pay, they will be shown in the first position.

Although we have talked about several highly successful examples of multisided platforms here, it’s known that most of the attempts actually fail. The truth is that the multisided platform business model asks for facing several challenges to get to the top. First of all, it requires consumption: if there are no transactions, there is no revenue. Thus, the company must be regularly acquiring – and retaining – audience. Building an initial user base can be hard and engaging them demand a high-quality service. So, this business model is pretty common and easily understood, as you may have seen above. However, it can be successfully executed only if you keep all the participants engaged, in order to keep the business running.