Walmart business model has turned the retail company into the largest supermarket chain in the United States, with more than 11,500 stores (including hypermarkets, supermarkets, and department stores), under 56 banners in 27 countries, and e-commerce websites in 10 countries.

They employ approximately 2.2 million associates around the world (1.5 million in the U.S. alone) and serve nearly 270 million customers. Walmart is also the largest company in the world by revenue, with an accumulated capital of more than 500 billion dollars.

The brand, which is a publicly traded family-owned company under the command of the Waltons, involves a retail chain that, today, still has its business model heavily based on brick-and-mortar retail – but its e-commerce has been expanding rapidly.

The entire Walmart operation, since its founding in 1962, continues to follow the driving force of founder Sam Walton, “saving people money so they can live better”. But how does this business model based on leading on price work? Let’s check it out!

The entire Walmart operation in the world is divided into three main segments:

Walmart U.S.: operates in all 50 American states and Puerto Rico. It represents more than 60% of the corporation’s sales, summing up physical and e-commerce stores.

Walmart International: covers operations in all 26 other countries, with supercenters, hypermarkets, supermarkets, warehouse clubs, and e-commerce (in 10 countries). This generates around 25% of net sales.

Sam’s Club: this membership-only warehouse club is in 44 states of the U.S. and Puerto Rico (and in e-commerce). It represents about 12% of net sales. Sam’s Club offers grocery and consumables, home and apparel, technology and electronics, health and wellness, and also fuel and similar.

Walmart Mobile App: in addition to the three main segments and their e-commerce, there is also a Walmart Mobile App (for iOS and Android). The app allows the customers to search and buy products of Walmart.com and even pay from their phones. The app also helps create shopping lists, check prices and availability, and even find the locations of the merchandise in the aisles.

A brief history of Walmart

The bases for Walmart go back to 1950 when the founder Sam Walton bought his first variety store in Arkansas and turned it into the Walton 5-10 store. Before that, he has already worked as a manager of that kind of store and saw the potential of the market in the future.

As his store became a great success, he decided to start his own discount stores and, in 1962, the first Walmart was opened. Strategically, Sam noticed that most retailers were competing in the cities, so he positioned Walmart as discount stores for suburban and rural people.

By 1967, Walmart would soon open 24 stores in Arkansas and reach more than $ 12M on sales. One year later, the expansion to other states would begin. In 1972, the company went public, and the revenues allowed the expansion to increase: in the following three years, there would be 125 stores in operation.

In 1983, after years of expansion and acquisitions, Walmart created the Sam’s Club, which later would become the most famous wholesale store in the United States. Five years after that, the first supercenter was opened, to offer everything under one only store.

And, in the same year, it became the most profitable retailer in the country. In 1996, Walmart achieved its first $100 billion in sales within one year.

Saving people money so they can live better.

Perhaps the main characteristic of Walmart’s business model is the commitment to keep its prices as low as possible so that they are accessible to practically the entire population.

To achieve this, Walmart has the largest network of suppliers in the world, from which they make purchases in large volumes, in order to guarantee a bargaining power that allows them to reach the lowest possible price.

Another tactic applied by the corporation is cross-docking, especially with regard to the Sam’s Club. It is an intelligent and organized redistribution system, in which the goods received in a warehouse, instead of being stored, are sent directly to the customer or point of sale. This allows for significant savings in logistics costs.

When we think of Walmart, the image of big centers and supermarkets always comes to mind. But one of the corporation’s strategies is to diversify access to the population. For this reason, Walmart is investing in:

Walmart invests heavily in a variety of products and brands, from local products to international names, both in its brick-and-mortar and online.

Walmart knows that the best strategy for customer retention is to offer them the best possible experience so that they can buy again in their stores. And the company knows that satisfied customers rely on motivated employees. Therefore, it seeks for paying its employees well while investing in personnel training.

It is worth remembering that the entire Walmart business strategy goes back to Sam Walton’s “10 rules for building a success”: 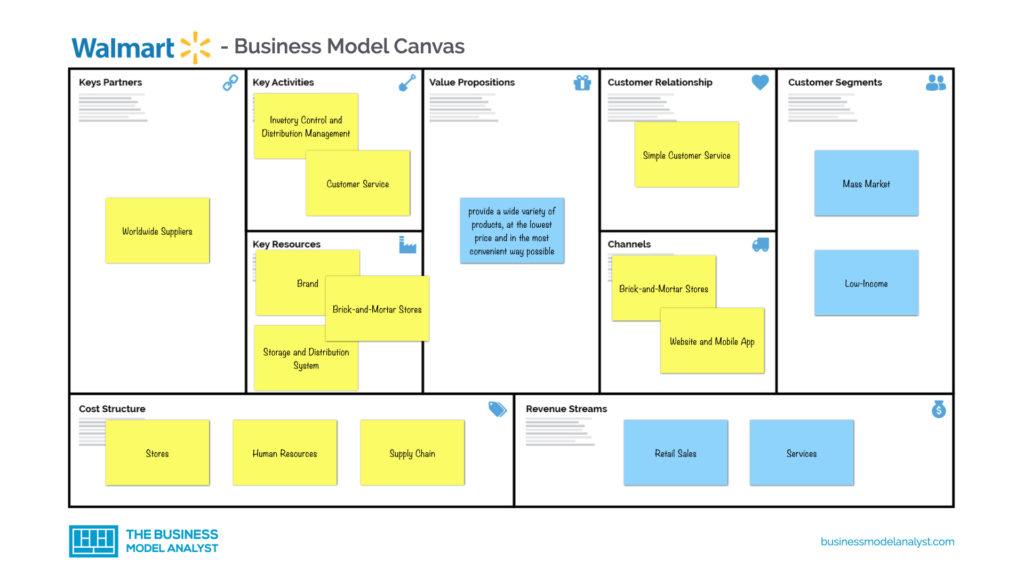 Walmart’s customer segmentation is done especially due to its primary low-price strategy. Therefore, its customers tend to be people who are looking for low-cost but good quality products, whether they are low-income people or just looking for the best cost-benefit.

The value proposition of Walmart is a reflection of its business policy: providing its customers with a wide variety of products, at the lowest price and in the most convenient way possible.

Walmart’s channels are widely known: the brick-and-mortar stores themselves, their website, their mobile app, social and mass media.

Walmart’s customer relationship is also entirely based on its value proposition – cheap, good and varied merchandise, easily accessible, and with the best service. For this, the processes are as automated and simplified as possible.

Walmart’s revenue streams are based, as we saw above, on its retail sales (national and international) and the Sam’s Club. But the company has also increased its list of services. See below.

Walmart’s biggest key resources are its own brick-and-mortar stores, its distribution, and storage system, its virtual infrastructure, with the e-commerce store and the mobile app, and, of course, its human resources.

Walmart’s key partners are certainly its suppliers, as they are the ones that allow the company’s value proposition to be delivered, by guaranteeing low-cost products and services, as well as access to different parts of the world.

Walmart’s cost structure is certainly not “lean”, as it has more than 11,000 stores (including supercenters) worldwide. However, its operations involve a financial discipline that allows reducing such costs to the maximum, so that these savings can be passed on to the final customer. 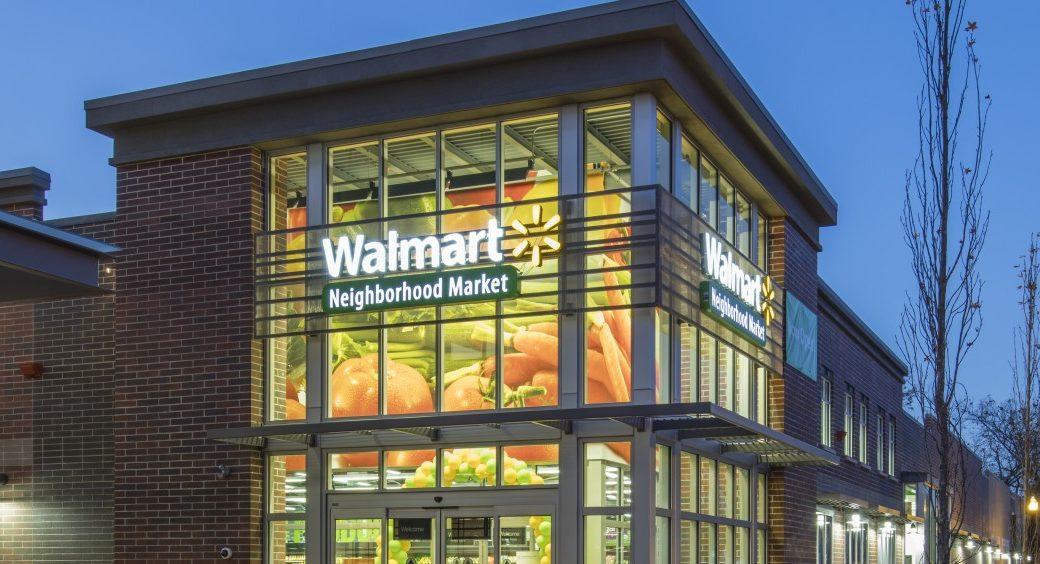 Retail sales encompass almost all of Walmart’s revenue and include products distributed under its own brand or other brands, both national and international.

There is also a small percentage of Walmart’s revenue from services. These services are:

Albertsons: a food and drug retailer.

Alibaba: e-commerce that operates in retail and wholesale.

Amazon: the biggest online retailer in the world.

Ascena Retail Group: an American retailer of apparel for women and tween girls.

Carrefour: the global leader in the food retail industry, it operates and manages supermarkets, retail stores, cash and carry stores, e-commerce websites, and convenience stores, among others.

eBay: an online auction and e-commerce platform that allows people and businesses to buy and sell goods and services.

IKEA: a retail and wholesale company that designs and sells ready-to-assemble furniture, kitchen appliances, and home accessories, among others.

Target: a merchandise retailer that sells foodstuffs and general products.

It can be seen that even though Walmart’s business model is always seeking to update itself on the market and available technologies, the base of its business remains grounded on the initial idea of ​​its founder about half a century ago: making people happy, by spending little.

With a giant chain of stores, a worldwide operation, and a team of more than 2 million workers, Walmart keeps in harmony between the beliefs of its founders, business strategies, and, above all, the experience and satisfaction of its audience.