Tesla Business Model operates as a Direct-to-Consumer (D2C) business model as it sells directly, cutting out middlemen such as dealerships and offering its own charging station network.

Which of these names do you recognize more easily: Tesla or Elon Musk? While, in general, we identify the author by the work – that is, it would be normal for you to know Elon Musk as the CEO of Tesla -, in the case of this visionary eccentric, in particular, it is quite common for the opposite to happen: Tesla being Elon Musk’s company.

But, anyway, in addition to its charismatic and incomparable leader, Tesla is also characterized by being a company that basically divides into three business models: an auto-maker, a hardware supplier, and a tech company.

We will know, then, how everything works in this hybrid business model, which has faced great challenges in the market. Follow up!

A brief history of Tesla

Tesla, Inc. is an American company, founded in 2003 by the engineers Martin Eberhard and Marc Tarpenning, originally as Tesla Motors.

Fourteen years later, the company would change its nomenclature, because it started to incorporate supply lifestyle products in its production.

Tesla’s first product was launched in 2008 – the Tesla Roadster, the high-performance electric sports car, whose sales ended four years later, in 2012. Instead of launching a cheaper first car, to gain in quantity, the Roadster was a luxury item.

Musk, the company’s CEO, explained that, with all the technology they intended to put in the car, it would be impossible for it to reach the market at a low price. For this very reason, they chose to launch a product, above all, compelling.

In the following years, Tesla invested heavily in marketing, research and development, prioritizing studies in safe, autopilot, and charging cars.

Tesla’s mission is to accelerate the world’s transition to sustainable energy.

First of all, unlike other automakers that have their cars sold by dealerships worldwide, Tesla focuses on direct sales. This means that all Tesla stores are an arm of the company itself and that anyone who is served in that space will, in fact, be received by an employee of the manufacturer itself.

This allows Tesla to improve its product through direct and fast contact with the customer and guarantees them differentiated service facilities, which include the possibility of customizing a vehicle via the internet.

In addition, the company has service centers in all places where it sells its cars, with personalized service, including by Tesla Rangers, technicians that the company sends to people’s homes for service.

These centers also have a charging service. But, more than that, Tesla also has an extensive network of Supercharges stations, where cars can be fully recharged in up to 30 minutes – at no cost.

Of course, in addition to these three factors, there is still a difference between the company’s own product. Tesla has the fastest and longest-range electric cars on the market, with unique design and brand identity.

Finally, there is still the entire research and development process promoted by the company. Tesla invests heavily in hardware and software, focusing on digital technology and even autonomous driving cars.

And yet, it increasingly seeks to reduce CO2 emissions, through investment in sustainable energy, which guarantees the support of the government. 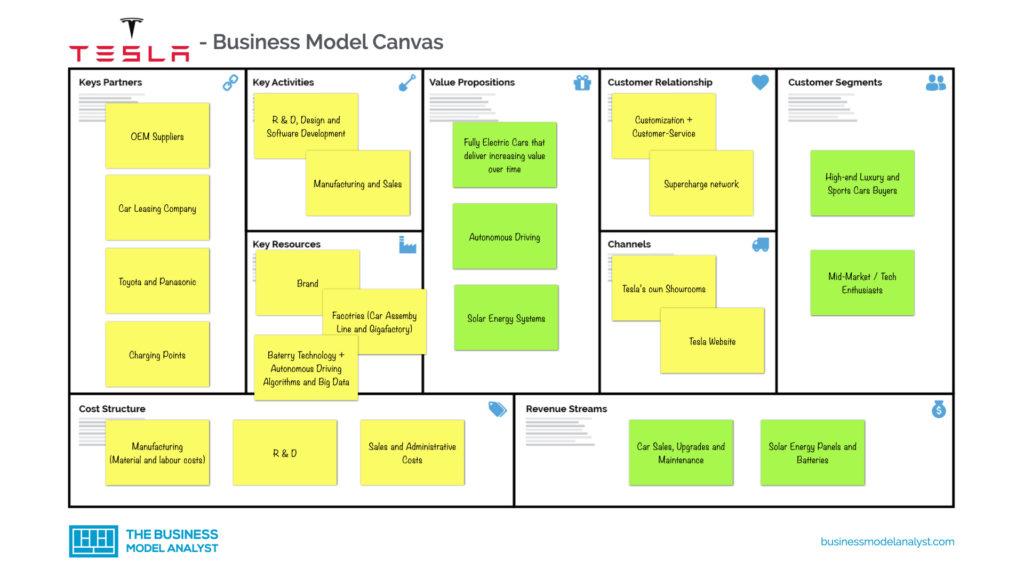 Aside from its own vehicles, it is worth remembering that Tesla sells home batteries and solar panels to residential and commercial customers, providing convenience when it comes to powering.

In addition, Tesla still sells systems and components to other auto manufacturers, as well as financial services, with loans and leases.

Tesla has developed vehicles for every type of customer. From the mid-market range, with affordable pricing, to the high-end luxury and sports cars, competing with Porshe or Ferrari.

In addition, Tesla is also covering the commercial vehicle sector, providing a greener option for transportations and shipping.

And, of course, it’s worth remembering that Tesla’s customer segments include fast, eco-friendly car enthusiasts, with autopilot – and, surely, Elon Musk followers.

The channels that Tesla uses to reach its audience, as seen throughout this article, are its own stores, its website (self-service online store), conferences, and sales events.

As stated above, the company doesn’t spend a lot on advertising. It believes in the power of its own brand and reputation, in addition to the charm produced by CEO Elon Musk.

One of Tesla’s foundations is the customer relationship, because, from the beginning, the company has focused its efforts on the customer experience.

That is why the company chose, as mentioned above, to implement company-owned stores instead of dealerships, in a direct-to-customer sales model. Besides, customers can choose, order and customize their car directly via the website.

In addition, Tesla is also increasingly investing in its charging network, to charge Tesla vehicles more quickly, at low or no cost.

Finally, Tesla has built a very positive brand and reputation with the public, always being associated with luxury, technological and innovative vehicles, and taking into account the environmental impact.

Tesla is a car manufacturer but has increased its scope to include solar energy systems, on the one hand, and lifestyle products for its fans, on the other. Observing its evolution, the question remains …

Tesla’s key resources are those that allow it to fulfill its key activities in order to deliver its value proposition. Therefore, we can highlight its cutting-edge technology and engineering, its long-life battery systems, its design, and its software.

Tesla has a very broad cost structure, like any manufacturer, which includes:

Certainly, its most important revenue stream was and remains the sale of electric cars, representing more than 80% of its revenue – estimated at more than 20 billion dollars.

The other 20% of income includes automotive services and vehicle leasing, but also sales of solar energy systems and storage products (about $ 1.5 billion).

Nio: founded in 2014, the Chinese Nio manufactures premium electric vehicles for the international market. Its sales have been growing more than 100% per year, but it has fewer than 200 battery stations in China, with plenty of room to grow.

Ford: this traditional auto company has entered the electric-powered market. Its sales of electric cars have been growing over 70% per year, and most of the buyers are new to Ford. As one of the oldest automakers in the world, the company has a great experience advantage.

Volkswagen: the German company launched its first electric vehicles one decade after Tesla. Nevertheless, it predicts that 50% of its sales in the USA will be EVs, and it is aiming to manufacture 1.5 million of those until 2025. Just like Ford, it has the strength of an old and traditional brand.

Li Auto: one of the newest competitors, founded in 2015, this Chinese company has surprised the audience with its technology. It is growing fast and sold over 10k EVs in its first year in China.

Nikola Corp: the company combines electric battery power with hydrogen fuel cells in its vehicles. But its focus will be on big vehicles, with electric and hydrogen fuel-powered trucks. Founded in 2014 in America, Nikola’s vehicles had zero emissions during 2016-2020.

Workhorse Group: based in the USA, this company focuses on electric vans for delivery services. It has already fulfilled a UPS order for 950 vans. The company was founded in 1998, but the offer for EVs only began in 2015.

Canoo Holdings: it is the latest entrant, with a different business model. Canoo’s vehicles will get on the roads in 2022, with a unique value proposition – drivers will pay a monthly subscription instead of buying or leasing the cars.

Tesla did not invent the electric car, but possibly it was largely responsible for shedding new lights on this product on the market, by producing cars with differentiated design, long-lasting batteries, and a whole technological support and servicing network.

In addition, it implemented a business model practically unique in its area, by selling directly to the consumer, without middlemen.

It can, therefore, be said, without fear of making a mistake, that Tesla is one of the most successful automobile industries today and certainly Elon Musk and his peers continue to seek new and original methods of transportation.