Called by many “the MacDonald’s of coffee”, Starbucks is probably the most famous coffee chain in the world, with more than 21,500 stores in 64 countries. And, as Starbucks itself states, the company is not “passionate” only about coffee, but everything that goes with it:

We also offer a selection of premium teas, fine pastries, and other delectable treats to please the taste buds. And the music you hear in store is chosen for its artistry and appeal. It’s not unusual to see people coming to Starbucks to chat, meet up or even work. We’re a neighborhood gathering place, a part of the daily routine – and we couldn’t be happier about it.

Let’s get to know a little more about Starbucks’ business model.

A brief history of Starbucks

The Starbucks story begins with three students at the University of San Francisco, back in the early 1970s: the English teacher Jerry Baldwin, the history teacher Zev Siegl, and the writer Gordon Bowker.

The three of them had met Alfred Peet, a coffee roasting entrepreneur, who taught them his style of roasting beans. After that, they decided to sell high-quality coffee beans and equipment.

And that was how the first Starbucks was born, on March 31, 1971, in Seattle, Washington. Following the initial idea, this first shop would only sell roasted whole coffee beans until 1976.

Five years later, Howard Schultz (chairman and chief executive officer of Starbucks from 1986 to 2000, and then again from 2008 to 2017) walked into a Starbucks store. He would join the company as director of retail operations and marketing the following year when Starbucks began providing coffee to fine restaurants and espresso bars.

In 1983, Schultz travels to Italy, and gets impressed with the espresso bars in Milan, and sees potential to develop a similar coffeehouse culture back in Seattle. So, in 1985, Schultz founds Il Giornale, a coffeehouse that offered brewed coffee and espresso beverages made from Starbucks® coffee beans.

Two years later, the original founders sold Starbucks to Schultz. He rebranded his Il Giornale cafés as Starbucks and began expanding the company. By the year 1989, there were 55 Starbucks stores in the USA.

Starbucks completed its initial public offering (IPO) on the stock market in mid-1992, with revenue of $ 73.5 mi and a market’s value of $ 271 mi. Four years after that, its first store outside North America was opened in Tokyo.

And, finally, nowadays, Starbucks is one of the 500 largest United States corporations by revenue, according to Fortune, with a market value of over $ 100 bi and 32,660 stores all over the world. 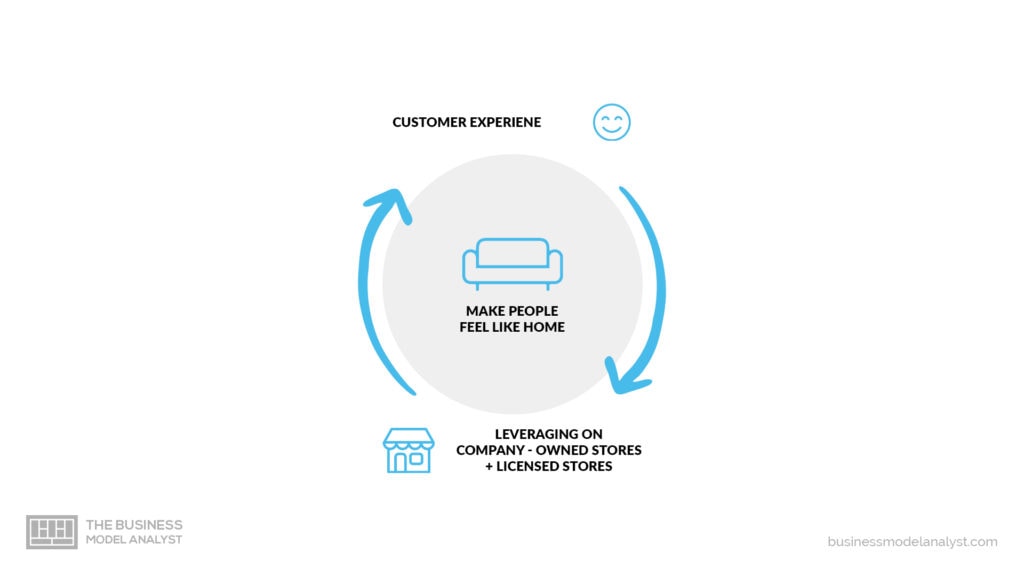 To inspire and nurture the human spirit – one person, one cup and one neighborhood at a time.

Simply speaking, Starbucks makes money by selling coffee, tea, food, and other ready-to-drink beverages in its company-operated or licensed stores. Other revenues also come from royalty and licensing incoming, consumer-packed goods, food service, etc., since Starbucks products can be found in grocery stores, convenience chains, and other beverage selling places.

Although almost half of the stores are franchised, Starbucks still makes most of its money from its company-operated stores: the segment makes 81.5% of total revenue (22.4 bi), which is nearly ten times its licensed stores’ revenue. However, it is fair to highlight that licensed stores have shown the highest revenue growth.

Americas (USA, Canada, and Latin America): This segment includes both company-operated and licensed stores. It’s the biggest and most mature business segment.

CAP & EMEA: CAP stands for China & Asia Pacific, while EMEA stands for Europe, Middle East, and Africa. Bothe the segments include company-operated and licensed stores, but these operations are in several levels of development.

Employees make and serve products to the customers, and also assist them anyhow. This ensures a loyal customer base for the brand.