Groupon Business Model has taken the world by storm almost over 10 years ago with its high-discount coupons. After many ups and downs, how is it holding up? Let’s take an in-depth look.

Groupon, founded in 2008, has gained fame and customers in several parts of the world, by offering up to 70% discount coupons and vouchers, on hundreds of products and services, from food to travel, mainly over local brick-and-mortar businesses.

Groupon’s business model, therefore, is based on a simple job: being the middleman. And, although many people believe the company is declining – and that it indeed has had some hard time over its lifetime –, Groupon’s figures keep quite positive, with more than 200 bi app downloads, 38 mi active users, and over 1.5 bi sold coupons.

But how does this translate into revenue for Groupon and value for its customers? That’s what we’re going to understand now when we analyze their business model!

A brief history of Groupon

The basis for what would turn into Groupon was settled when its founder, Andrew Mason, was a student at the University of Chicago. He actually left school, in 2007, after receiving a $1 million investment offer and started the company The Point.

The objective of the business was to improve the online fundraising experience. So the “tipping point” was established. The tipping point would be a certain quantity of money or signatures the fundraiser would set for the plan to get into action, and credit cards would not be charged before the goal was met.

That would be convenient for the fundraiser who would be able to check the donations growth and safe for donators, who could be sure where their money was going to. However, The Point was not focused enough, and it started drowning.

But one thing appeared to work out: group deals. The Point’s team would call hundreds of vendors a day to create daily deals, they called Groupons. And the deal would only go through when a determined amount of people bought it. The concept was a win-win situation for vendors, customers, and for the company.

So, in 2008, The Point gave room to Groupon, dedicated to advertising local businesses through limited-time deals. The next year, Groupon would expand from Chicago to other 28 American cities. Some more months, and it reached some European markets. In December of 2010, Google made an offer of $6 billion for Groupon – and it was declined.

Currently, Groupon has more than 26 million active customers, with over 1.5 billion groupons sold to date.

“Our mission is to be the daily habit in local commerce. Community matters to us on an internal, local, and global scale—it’s fundamental to our company’s growth and to the well-being of the world at large. Within our walls, community means taking care of our most valuable resource: our people. We also know that our teammates need more than competitive benefits to feel supported, which is why we work to cultivate an inclusive environment where everyone can bring their whole self to Groupon. Outside of the office, we focus on paying it forward through volunteering, social responsibility, supporting local business, and community building around the world. If you’re ready to make an impact, you’re ready to be part of Groupon.”

The discount coupons are loss leaders. A loss leader is any kind of product or service, at a very low price (capable of making the business lose money on), but that, on the other hand, will make the customers come over, get to know the place, spend money on other things and maybe become a regular.

The groupons (Groupon coupons) have always been targeted to young people who want to explore new possibilities in their cities, without spending too much. That’s why the bargains have been much more about things people want rather than what they actually need. Often, on businesses such as:

The groupons always have expirations dates and they are usually limited to first-time customers. The first expiration date is about how long the deal is available for purchase, usually for 24 to 72 hours. The second expiration date refers to how long the coupon is valid for redeeming, often for 6 to 12 months.

Some businesses would also restrict the use to a specific product or service (only one dish of the menu or a single type of service in the salon, for example) and sometimes only one at a time (one coupon per table in a restaurant, for instance).

Another option besides the coupons, there are the card-linked offers. They are cashback or discounts received automatically as soon as the user links their debit or credit card to the app.

How to get a Groupon

You can sign up on their website, iOS app, or Android app. The coupons are separated into categories and companies, and you can filter by location and price.

On the app, you can get a virtual voucher before making the purchase (the app also sends you notifications about deals when you are near the businesses that are offering). On the website, you may print the coupons and take them to the place.

You can also have a coupon code, to use online. In this case, you just copy the code and make the purchase directly on the partner’s website. And, finally, there is the cashback and discount card-linked system, just by adding a card to make the purchase. 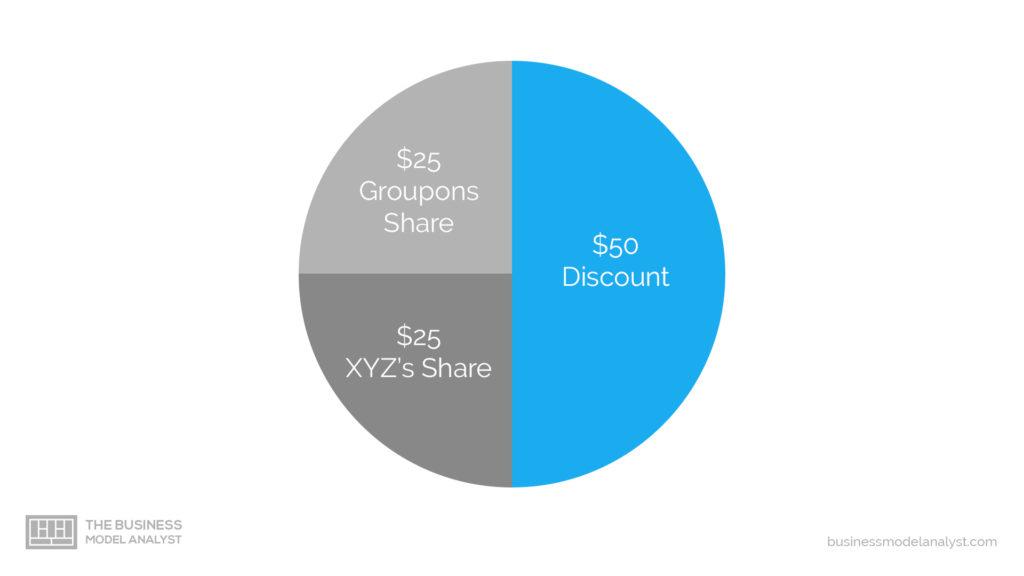 Since Groupon is a multi-sided platform that stands for a middleman promoting businesses, it earns commissions on sales, from the companies they promote.

It typically gets 50% of all concluded sales. That usually represents a 75% loss to the merchant (summing up discount and commission). Either way, 97% of merchants ask to feature deals more than once. 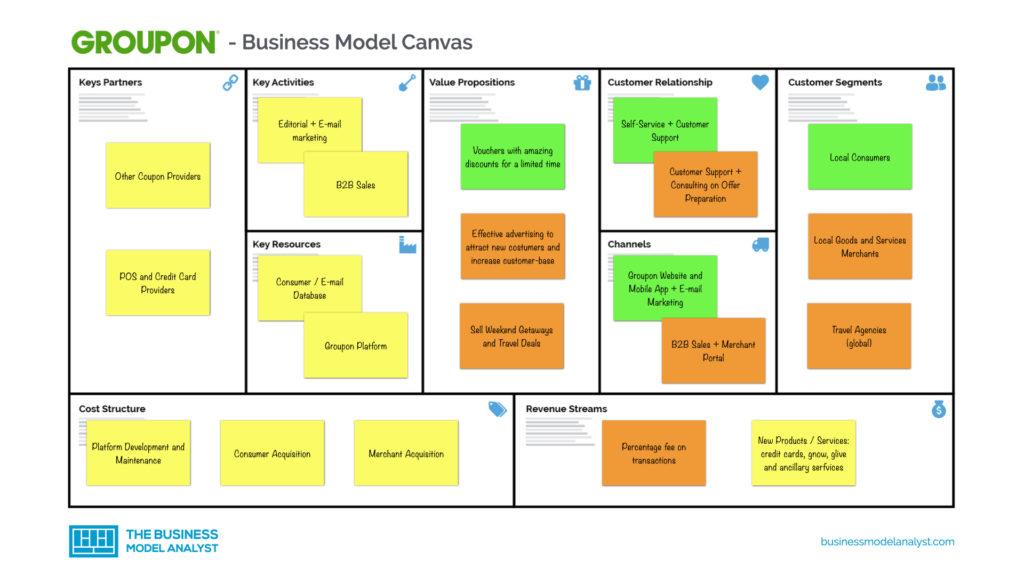 Download a High-Resolution PDF of the Groupon Business Model Canvas

Groupon business model can be defined as a multi-sided platform. Its customer segments can be divided into two great ones: merchants and consumers.

Groupon has more than one customer segment than it also has one value proposition for each segment.

Groupon has a wide variety of key partners. Among them:

The greatest key activity is growing the marketplace, both by attracting consumers and adding merchants. Besides that, Groupon focuses on marketing and engaging customers (to achieve the first key activity), expansion (to get to new cities), improvement of merchant tools, advertisement, customer experience, support and maintenance, and others.

To accomplish its key activities successfully, Groupon relies on some key resources. Most of them are not tangible:

The customer relationships of Groupon, with both consumer and merchant segments, are based on:

Groupon benefits from a wide range of distribution channels, which include:

Within Groupon’s cost structure, there are:

As it has been seen above, Groupon’s revenue streams are based on commissions, taken from all sales the platform registers. 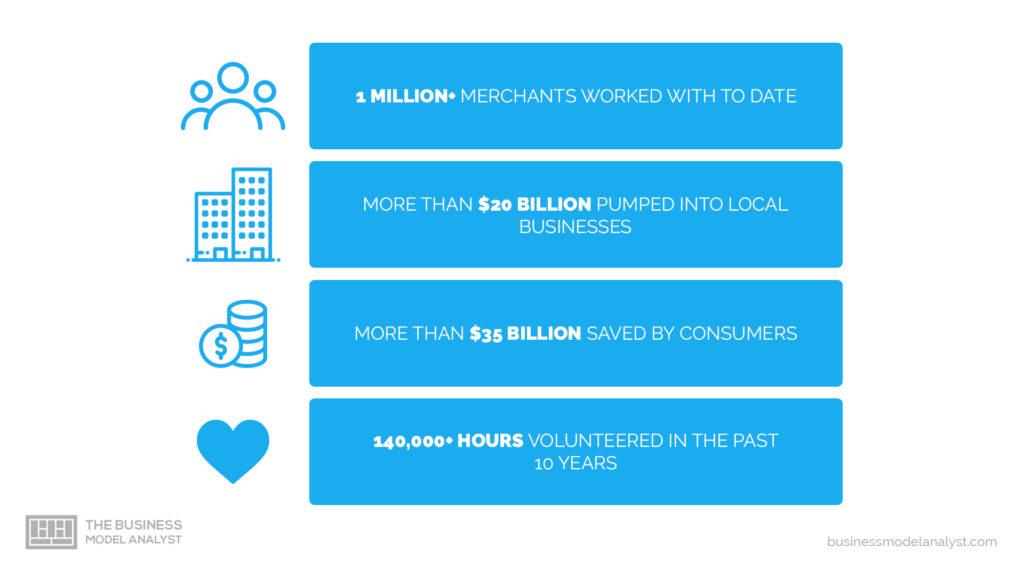 Groupon was launched 12 years ago and surfed a wave of popularity during the first years. Three years later, it went through an initial public offering (IPO). After that, the company’s revenue has been often in decline, nevertheless, its figures look still optimistic.