Glassdoor is an online platform where employees can, anonymously, rate and review the companies in which they work – or have worked. At the same time, employers may advertise their job listings on the website. So, it is fair to say that Glassdoor business model is kind of a marketplace for human resources. You may also say that they mix subscription model and a pay-per-use model.

Headquartered in California, with offices in Chicago, Dublin, London, and São Paulo, Glassdoor has built a disruptive business model, with more than 50 million visitors per month. Let’s go deeper on that.

According to Glassdoor’s website, the platform is “one of the world’s largest job and recruiting sites”. It operates as a part of Recruit Holdings’ growing HR Technology business segment.

The company provides over nine million job listings, several reviews, and lots of information on salaries, interviews, benefits, besides photos and questions. And, differently from other sources, every data come from real employees.

Because of that, employers will also use the Glassdoor platform in order to recruit and hire candidates.

How does Glassdoor work? 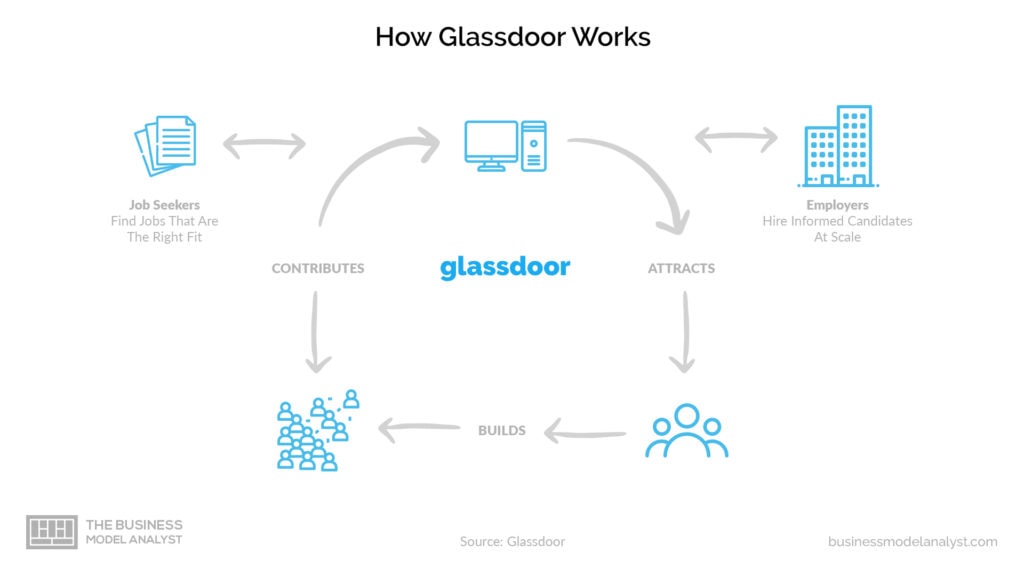 Glassdoor is a kind of marketplace that connects individuals and employers. The employers can post jobs on the platform, and the employees can evaluate their current and former employers.

Individuals can search for jobs, collect and post information about an employer (such as salary, available positions, benefits, interview questions, vacation, trips, and more). They can also publish potential questions that might be asked in certain companies’ interviews, besides other useful information for job applicants’ preparation.

They can also compare two possible employers, considering work-life balance, opportunities, culture, or senior management approval. And the platform will also offer suggestions of companies to be followed, according to the employee’s interests and work history.

On the side of employers, it is possible to seek new qualified employees. The employer account permits responding to employee reviews, managing the company profile, verifying analytics, job advertising, bench marketing, and enhancing the brand in order to attract eager applicants.

Moreover, Glassdoor data has even been used by outside sources to produce estimates and statistics about work-life balance, office cultures, salary trends, corporate revenues, and more. And, every year, the platform determines its annual Employees’ Choice Awards for Best Places to Work.

The website also verifies the veracity of the reviews, by checking if they come from real employees, through technological tools and a content management team. The company

A brief history of Glassdoor

As mentioned above, Glassdoor was founded 12 years ago, by Robert Hohman, Rich Barton, and Tim Besse. They met each other when all of them worked for Expedia.com. Hohman was the first to leave Expedia but remained in contact with the other two.

The idea for Glassdoor came from Barton. In the year 2007, he accidentally sent to print a document that contained salary and stock data, and his assistant rush to pick the papers before anyone else could see the information.

Barton questioned himself what was the problem about exposing this kind of information when you are doing your job properly and being fairly paid for that. Sharing these thoughts with the other future founders, they created the prototype site for Glassdoor.

Then, the trio asked their friends and acquaintances to leave reviews on the site. They also raffled an iPod among engineers from the Silicon Valley, in exchange for them to publish reviews and salary information.

In 2008, when Glassdoor was officially launched, the website contained more than 3,300 reviews on 250 companies.  And, surprisingly over the same launch day, the platform received more than 1.2 million views, 10,000 salary reports, and 3,000 companies – and even a crash down due to traffic.

10 years later, Glassdoor was acquired. Nowadays, the website has over 10 mi job listings and more than 60 mi reviews, salaries and insights shared. There are 11 offices and over 600 employees across the planet. 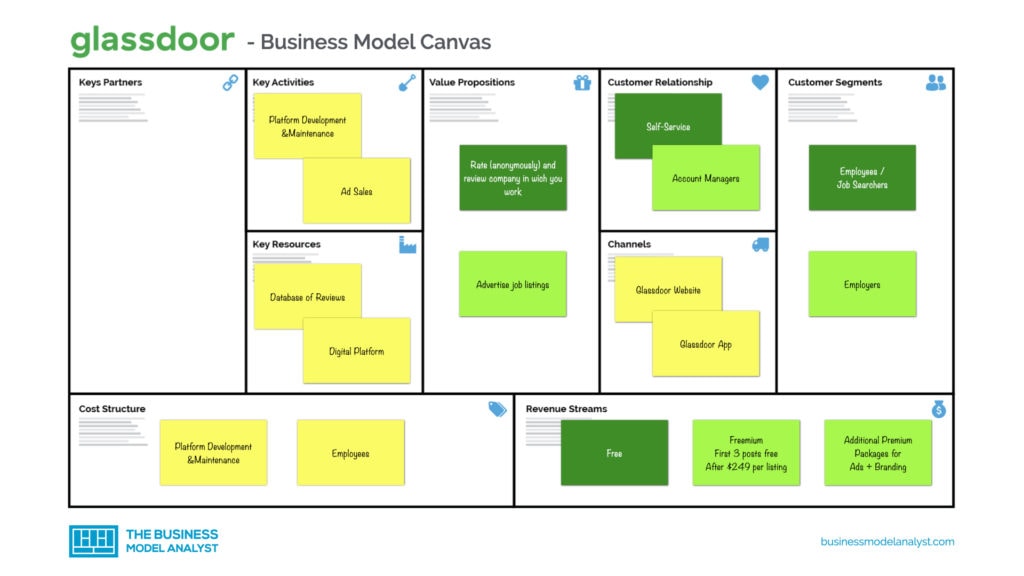 How does Glassdoor make money?

Currently, Glassdoor offers a wide range of solutions for helping companies to find suitable candidates for their job vacancies. While employees and applicants can enjoy the platform features at no cost, the employer-side is monetized. Let’s take a look at Glassdoor’s revenue streams.

For small businesses, Glassdoor applies a freemium-based strategy for posting open vacancies. The first three job posts are free. Over that, the platform charges $249 per listing.

For medium, large and enterprise organizations, there are more complex packages in order to meet their demands.

The job ads aim to boost attention to specific listings, by promoting them on the top of the job feed. They are part of premium charging packages and vary according to the number of posts and promotions.

Employer branding refers to how a company is presented on the platform. Employers may bring a great review to the top of the feed, add photos and videos, remove competitors’ ads, create targeted campaigns, and more. These features are all part of a wider premium package.

Besides its recurrent revenue, Glassdoor has also relied on substantial amounts of funding, summing up to a total of $204.5 mi in ten rounds, until the company was acquired by Recruit Holdings, in 2018.

According to Glassdoor, its mission is “to help people everywhere find a job and company they love”. And, in order to reach that, they share both the good and the bad information, to collaborate for people to make the right decisions.

Because of that, some analysts believe that Glassdoor has not created only a new platform, but, in fact, a new market. Now, employers are pushed to pay Glassdoor in order to build a nice reputation among employees, thus enhancing their chances to recruit and retain talents.