The GitHub Business Model mixes both Freemium and Software-as-a-Service business model, meaning that it offers a software license in cloud infrastructure and charges its users a monthly subscription.

First things first: if you are not a developer – and have no contact with the coding world –, you may not be familiar with the name GitHub. Nevertheless, GitHub Business Model has inserted its brand among the 100 most visited websites on Earth.

Known as Google Drive for code and social networking site for programmers, this Git repository hosting service has more than 33 million unique users each month. GitHub is simply the largest software development platform in the world.

It’s used both by individuals and famous big companies, in order to develop and share code. Let’s get into the GitHub business model a little deeper – from the first base.

GitHub is a cloud-based platform, used by developers to organize programming projects, by storing, managing, and sharing code, as well as by tracking and controlling changes to their code – all while communicating with each other.

But to understand how GitHub business model and website work, it’s essential to get to know the “Git”.

Git is an open-source version control system. When developers start a new project, they make recurring changes to the product code. For that, they release new versions of the code after the first official one (non-beta).

Version control systems store all the modifications made in the code in a central repository, permitting these revisions to be shared, downloaded, changed, etc., providing collaboration among programmers.

Created by Linus Torvalds (Linux’s creator) in 2005, Git is the most used version control system, chosen by almost 90% of developers around the world.

GitHub is a company that provides a Git repository hosting service. Each project is stored in its own repository, accessed through a unique URL. It allows individuals and teams to collaborate and control code versions. Anyone can host a public code repository for free (private repositories are charged).

So, if a developer finds a project that they might contribute to, they can make the changes to the original code and release a revised new project. The programmer who revises and changes some code may even ask to be included in the official project if the original repository’s authors accept that.

One of the nicest resources about GitHub is the social networking feature. Every user has a profile, that stands for a resume, with past projects and contributions. Also, the revisions can be publicly discussed, which fosters collaboration and programming advancement.

GitHub’s business model has been developed for developers, surely. But that doesn’t stop other people to use it as a repository for any type of files. It’s a lot less common, but any team that needs to constantly change some file or document may take advantage of GitHub’s structure, to control versions.

As mentioned above, while public code repositories are free, the private ones are paid. GitHub sells subscription plans, both to individuals and businesses. The prices vary mainly according to the number of private repositories – collaborators and public repositories are unlimited. Here are the GitHub plans:

The biggest revenue stream of Git Hub is the Enterprise plan – over 50% of income. GitHub One aims for large companies. It has every feature from the Enterprise plan, with some extras, such as 24/7 support and community-powered security.

Besides the subscription business model, GitHub also makes money from its marketplace and shop. The marketplace allows users to share their apps on the platform. On every sale made there, GitHub cuts 25% as a commission. And the GitHub Shop offers merchandise like clothes and collectibles. 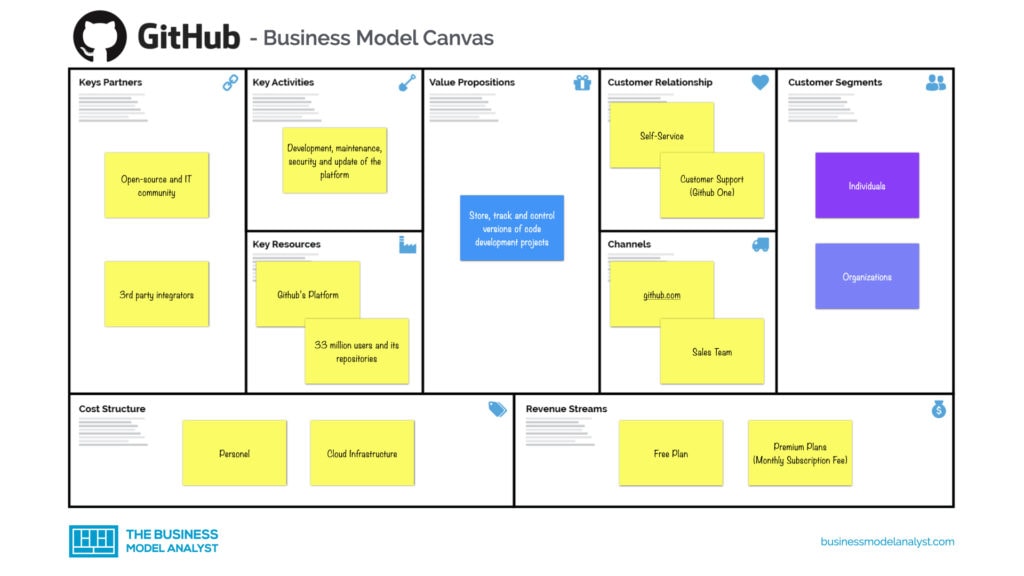 GitHub business model’s customer segments are based on a market niche: specialized individuals and/or organizations that want a repository to host their Git code.

The main value proposition is precisely the possibility to store, track and control projects developed on the most used version control system in the world (Git), along with the option to integrate them with other tools, and, yet, to choose to keep the code private or public.

Besides that, GitHub’s reputation as the largest code host on Earth attracts a great number of programmers interested in sharing, collaborating and being part of important coding projects.

GitHub’s customer relationship is pretty reduced. The website is a user-friendly automated serf-service, with limited interaction with employees. Customer support is mostly done by its Help section, FAQ and via e-mail assistance, but the most advanced plan (GitHub One) includes 24/7 support.

Its key resources involve GitHub’s platform, cloud systems, its 33 million users and their repositories, engineers, and staff who maintain the company, and the instructors who give the training courses.

Its key partners include:

GitHub business model has provided the world with an open-source platform, where developers from all over the world can showcase their talents and take part in large projects, by developing and sharing code effortlessly.

It’s worth saying that great brands, such as Google, Facebook, Twitter, and Microsoft have projects housed on GitHub. By the way, Microsoft has seen so much value in the venture, that the giant acquired the code-repository service for the humble amount of $ 7.5 billion, in 2018.