The Facebook business model is a multisided platform. Although other brands have called themselves “social networks” before, such as Myspace or Orkut, it’s fair to say that the first to turn this digital environment into a successful business model is, no doubt, Facebook.

With over 15 years in the market, Facebook now has more than 2bi users all over the world, and it keeps active and growing. Also due to the acquisitions the company has been taking, of brands – and competitors – as Instagram and WhatsApp.

In spite of all the speculation about selling users’ data, Mark Zuckerberg, Facebook’s founder, states that this has never been – and never will – the network’s revenue stream. Even because it wouldn’t be financially healthy for its own business.

But, if that’s true, then what’s Facebook Business Model? How does Facebook make money? Let’s take a closer look.

More than a social network

According to Zuckerberg, as he was developing Facebook, he wouldn’t have the ambition to build a worldwide enterprise. Unlike that, he would only realize that one “could find almost anything on the internet—music, books, information—except the thing that matters most: people”.

Nowadays, Facebook has several other companies under its “umbrella”. Among them, there Instagram, WhatsApp, Oculus (virtual reality tech), Moves (step counter app), and more.

Facebook’s history goes back to 2003, when the founders Mark Zuckerberg, Eduardo Saverin, Dustin Moskovitz, and Chris Hughes were studying at Harvard University. It began as an online service where students would judge each other’s appearance, called Facemash – but it was shit down on only two days, for violating some policies.

In January of the next year, the four of them developed thefacebok.com, a social network for Harvard students to post photos and personal information. As its popularity grew, thefacebook.com was open for students from other institutions to join.

By the end of 2004, over one million people had registered and, in the same year, companies such as MasterCard offered to pay for advertising on the website.

In 2005, the social network removed the “the” and became only Facebook, and high-schoolers and students from outside the United States were allowed to join. That enabled the website to jump to six million users. The next year, anyone above 13 years of age would be welcome.

In 2008, Facebook surpassed MySpace and, four years later, it became a public company, with its initial IPO raising $16 billion – which lead its valuation to $102.4 billion.

Facebook’s mission is to give people the power to build community and bring the world closer together.

The great revenue stream of Facebook is the targeted advertisement, due to the benefit that the platform offers, of allowing the advertisers to reach their target audience, through information the network collects from its users.

And, according to Zuckerberg, that’s precisely why it wouldn’t make any sense for Facebook to sell its users’ data. It would be cutting its own throat, as the platform would be handing over its greatest differential. Soon, the advertisers wouldn’t need Facebook anymore.

Facebook’s trump card is exactly to permit its advertisers to invest money in the right audience. Within more than 2 billion profiles, the businesses are able to have their products/services viewed only by American 25-30-year-old females, who have a degree and are interested in marriage, for example.

That’s the way advertisement became accounting for 97% to 99% of Facebook’s revenue. The other 3% or less is made up of payments received by games played and products sold on the platform, private social network services to businesses, and other products offered by each of the brands under its umbrella, such as Oculus virtual reality device. 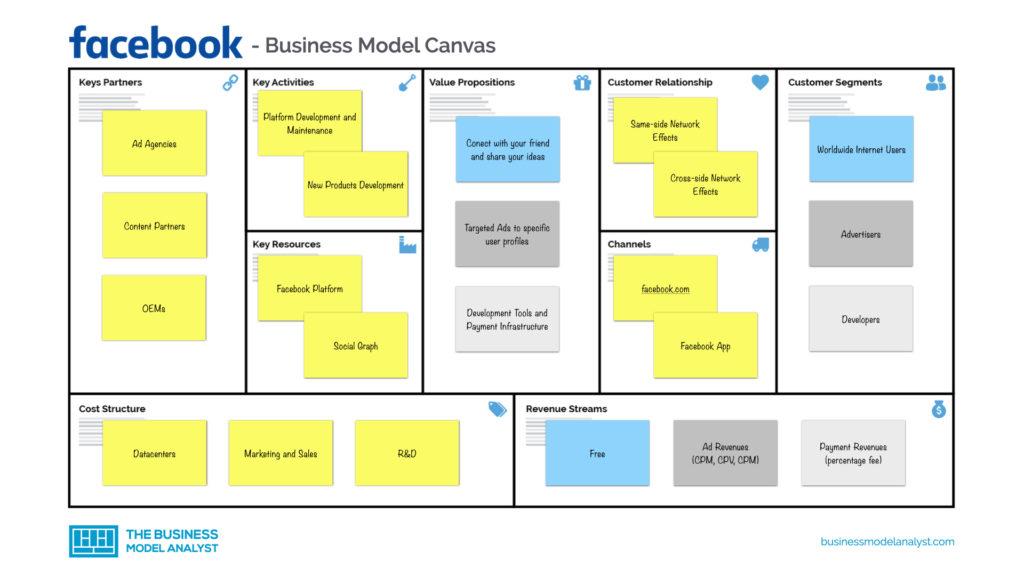 As Facebook has three diverse customer segments, each segment will perceive the brand’s value in a different way. That said, let’s divide the value proposition by segment:

It’s quite clear that the main distribution channels of Facebook are its own website and app, because that’s where users find each other, and advertisers access their audience. Inside that, the channels can be divided into Feed, notifications, direct messages, and stories.

Other channels include the apps stores, other products of the company, e.g. Instagram and WhatsApp, and, of course, word of mouth power.

Facebook’s customer relationship is based on its own platform, which is very user-friendly, as it allows users to specify their profile configurations and use, with no hard time. In addition, Facebook has an international sales organization, that works alongside with marketing and advertising agencies, to attract advertisers.

Above all key activities, it is the platform development and maintenance, in order to ensure a positive experience and avoid negative effects in the social network.

Then, besides all the infrastructure that the website demands, to keep it working properly and optimizely 24/7, Facebook also needs to invest in good practices and control bad behavior within the network.

Furthermore, the company focuses on user acquisition and engagement, data and information storage and security, talent hiring and retaining, sales and marketing.

Within Facebook’s key resources, the only tangible one (but essentially digital) is its platform, which demands technological infrastructure.

Aside from that, the other key resources are the network users and their content production, and the Facebook brand. The active users are the company’s biggest asset. Because, if there aren’t users, there is no audience to view the ads. And to make them engaged, there must be relevant content, to avoid churn.

As for the brand, it’s a very powerful name, still the great synonym for “social network”, indeed.

The biggest share of Facebook’s cost structure revolves around platform maintenance and its billions of users’ data storage. Besides, there is user CAC (cost of acquisition) by delivering tools that foster user engagement, research and development investment, marketing and advertising, customer support, and all the regular general and administrative expenses of a worldwide company.

Advertisement, commissions on games played and products sold on the platform, sales of private social network services to businesses, and sales of products (like Oculus virtual reality device).

Snap: photo and video sharing app released in 2011, with 280 million active daily users. It is very popular among kids under 16 because the content disappears in seconds.

LinkedIn: the professional network, launched in 2003. It aims at linking recruiters, employers, and potential applicants. The site is free to use, but it has some premium features, for its over 600 million registered users.

YouTube: the video-sharing platform allows users to upload, view, and share videos. It was founded in 2005 and accounts for 2 billion regular users, who watch more than one billion hours of videos each day.

Pinterest: this social networking site is for saving and discovering creative ideas. It was created in 2009 and it has around 480 million active users nowadays.

TikTok: it is a social media app for creating and sharing videos or for live broadcasting. Founded in 2012, it is the newest one and has more than one billion active users currently.

Despite all the accusations and controversies, Facebook is still booming. Although many people believe this social network is going to end soon, Facebook’s brand and business are going to certainly remain, investing in new approaches and brand names, as you may have noticed.