Besides his work with business modeling, he is also an entrepreneur, speaker, consultant, and a management theorist. And that’s why he is often invited to give lectures and workshops in companies, business schools, congresses, and the greatest universities of the world, such as Stanford, Berkeley and MIT.

Nowadays, Osterwalder is one the most innovative scholars regarding to business models.  His book, Business Model Generation, written in partnership with Professor Ives Pigneur has become a worldwide best-seller, due to its revolutionary characteristic.

Currently, Alexander Osterwalder’s Business Model Canvas is utilized by great organizations’ leaders all over the planet, such as GE, P&G and Ericsson.

A brief biography of Alexander Osterwalder 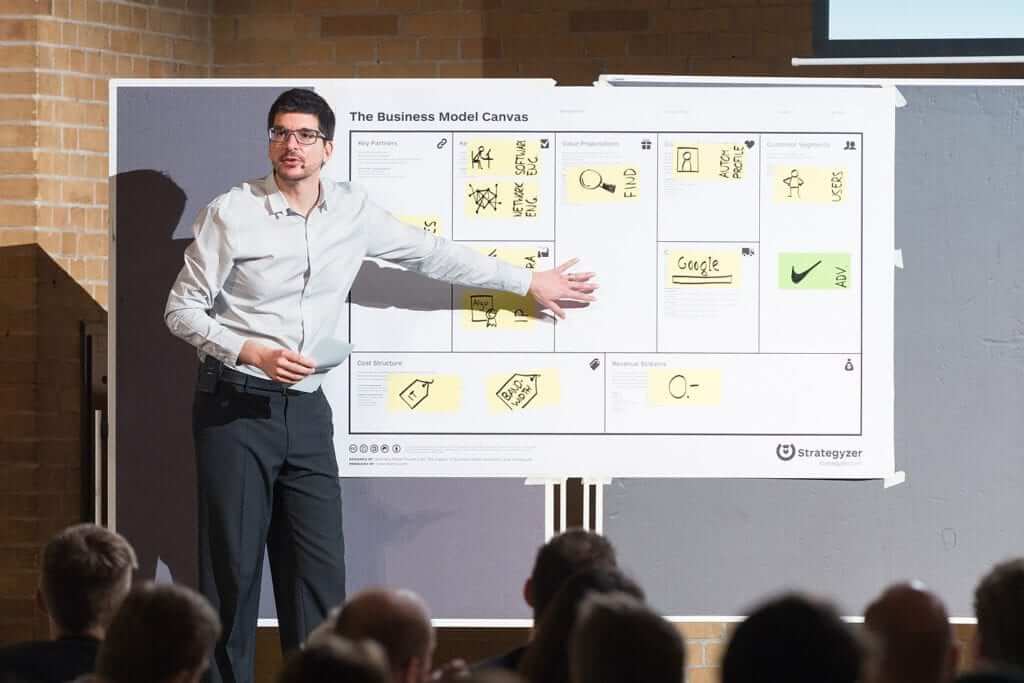 Alexander Osterwalder was born in St. Gallen, a city in the western Switzerland, in 1974. At the age of 25, he co-founded his first startup, Netfinance.ch, focused on financial literacy, that is, teaching people how to manage their resources effectively.

A year later, he completed his master’s degree in Political Science from the University of Lausanne. And in 2004, he became a doctor in Management Information System at the same institution.

His PhD thesis, entitled “The Business Model Ontology – a proposition in a design science approach”, was supervised by Professor Yves Pigneur – who he would write his famous book later on. This thesis promised to describe any business model in visual language.

Meanwhile, during the years 2000 and 2001, he wrote for BILANZ, a Swiss business magazine, and from 2000 to 2005, he became senior researcher for University of Lausanne – the same period of his PhD.

In 2006, he founded BusinessModelDesign.com and, four years later, he co-founded Strategyzer, a consultancy company that has served more than 5 million people with his Business Model Canvas, published in the same year, 2010.

In 2013, Alexander Osterwalder received the Innovation Luminary Award, offered by EU’s Open Innovation Strategy and Policy Group (OISPG), that aims “to celebrate and recognize outstanding innovation role models and through this to inspire the next generation of innovators.”

One year after that, he published his second book, Value Proposition Design: How to Create Products and Services Customers Want. This book follows the conversation began with the Business Model Generation, in 2010, by discussing the best way to find the fit between a product and its target market. Since then, he published three more books: High-Impact Tools for Teams, Testing Business Ideas, and The Invincible Company.

In 2015, Osterwalder received Thinkers50’s Strategy Award. It’s an organization based in London, that calls itself “the world’s most reliable resource for identifying, ranking, and sharing the leading management ideas of our age”, with the ambition of providing “innovative access to ideas with the power to make the world a better place.” 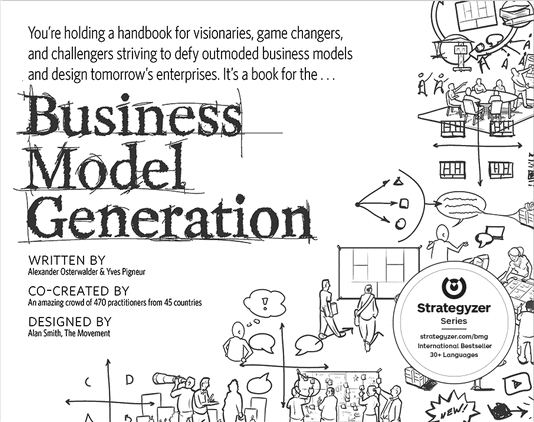 This Osterwalder and Pigneur’s book is about the challenge of developing a business model by the Business Model Canvas. This canvas offers a framework with nine building blocks, which are essential for designing a whole business model.

It’s, indeed, a systematic method for approaching a business model development, in a visual, logical, and organized framework.

A curious and very relevant information is that, when Alex Osterwalder called his Professor Pigneur to publish the book which would present the study they have fulfilled for the Ph.D. thesis, they decided to start everything over.

Instead of simply expanding the thesis, as many scholars do, they just began to research everything, all over again, collecting material and knowledge enough to get to a unique nine-element list for any and all business model, in this clear and accessible canvas.

To get that, they put together a team composed of 470 people from 45 different countries, in order to discuss and assess this first product. The consultants helped both of them to refine and get to the final book, published in 2010 and quickly translated to more than 30 languages.

Nowadays, the Business Model Canvas is the maybe the most famous and most applied business modeling tool all over the world. 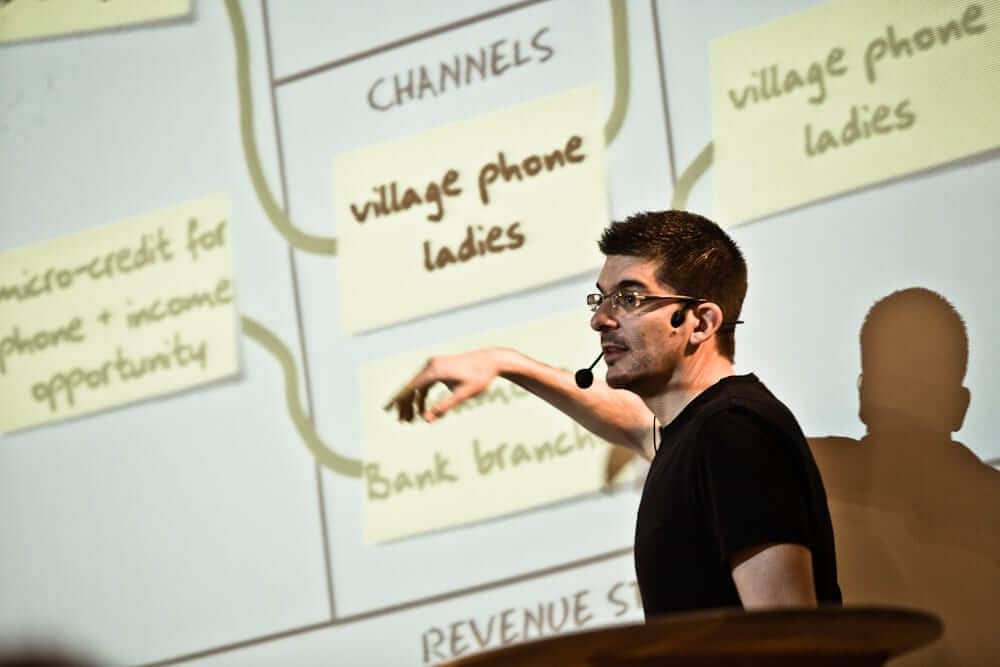 Besides Business Model Canvas, Osterwalder has also developed other tools for business:

Alexander Osterwalder also keeps on giving lectures for up to 5 thousand people a time, which encompasses, among other things, his tools applicability, in a very humorous manner, and plenty of interactive exercises.

His Business Model Canvas has been employed by leading global companies, such as Coca-Cola, Mastercard, 3M, Intel and Microsoft, and his Business Model Generation has been nominated among the 12 best business books of all time by USA Today.

Osterwalder is also a very well-known name in Fortune 500, he stands for the 4th among the top 50 business thinkers in the world, alongside with Pigneur, and he is a member and founder of The Constellation, a global non-profit organization that wants to change the history of AIDS and malaria in the world.